I’m warning you now, the wank factor is about to go up to 11.

Have you ever looked at the newspaper and thought “Oh look, some thoughtless and deranged individual has vomited on my paper. Wait, no, they’re editorialising actual proper news on the front page again.”

It gets worse, at least for our local rag. Behold.

This next one is not politically affiliated, but I wanted to include it to showcase the extremes that this supposedly well respected news outlet will go to garner sales and hopefully wedge a shitty pun in there at the same time. This is a story about a young attractive school teacher with the world at her feet who went missing. It turns out she was tragically taken and murdered by a dude who had a crush on her. She was due to be married shortly thereafter.


What the legitimate fuck were they thinking?

To be clear, this is not ‘meant’ to be a tabloid paper. This is Queensland’s only proper actual newspaper. News Limited holds the monopoly on print news in this state. For many people who don’t necessarily rely on online news to be informed, this is their only form of news and insight into the strange and confusing world around them. Yes, those people exist. They are mushrooms. They are kept in the dark and fed bullshit. And there are a lot of them.

This newspaper is just an example obviously, but this is a pervasive trend that I know that we all know. But some don’t know. But we assume that they know, you know? The fourth estate is dead in some corners, but we don’t mind because we are smugly in the know, and know to ignore it, or at least laugh at it.

So when you take a peek at what exactly it is that you’re ignoring in our more popular news channels, it’s quite scary seeing what’s being thrown out there for people to potentially believe unquestioningly. And it can actually have an effect on our society, regardless of how ludicrous it looks.

Take Queensland’s most recent election for example. Despite the sitting Premier’s absolutely appalling public image and polling, our News Ltd outlet and sole Queensland based newspaper ran with a charming series of front pages that were about as subtle as a brick to the face, or an erection in tracksuit pants. 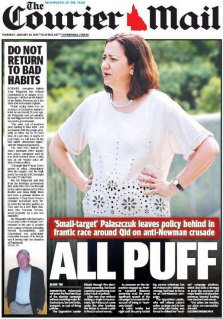 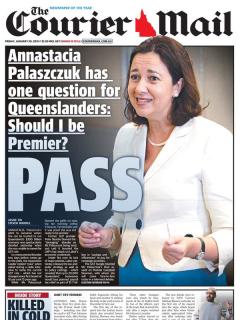 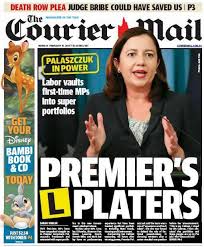 Bullshit. That last one was after her *very* narrow victory. And they’re still cracking in. The same thing happened during our Federal election as well. I’ll stop picking on The Courier Mail now. It’s low hanging fruit and it’s easy. I’m better than that. Come on man, get your shit together.

You don’t have to look far for more brilliant examples though.

Even just recently, the Daily Telegraph (ok, yes another News Limited publication, I’ll hit up the lefties soon, don’t worry) photoshopped a picture of deputy opposition leader and shadow Foreign Affairs Minister Tanya Plibersek in a hijab and surrounded by known Australian’s fighting in Syria and Iraq for ISIS.


Casual racism and the demonisation of billions of people worldwide aside, damn man, that’s some personal shit just because she dared to suggest that humanitarian aid to Syria might be a good idea because the people there are dying by the bucket full.

In an absolutely hilarious demonstration of the partisanship in our media in action, the Australia’s conservative party, who happens to be in power currently, led a boycott of the ABC current affairs discussion program Q&A when the producers did something that upset the sitting party. They’re used to being able to shape the press to their advantage and when they couldn’t, on the national broadcaster that they are in fact funding, they cracked the absolute legitimate actual shits. And their journalistic affiliates that have no trouble toeing the party line were quick to crack in.


To be fair the other side is often not any better. In what is probably the best example of an outlet and wank-central for the nations young left, Tom Tilley routinely puts our nations conservative politicians to the sword. Although to again be fair they more often than not bring it upon themselves. Looking at you Federal Environment Minister Greg Hunt and your trainwreck-like interviews in which you somehow never learn that Tilley’s job is to make you look silly.

I’m picking on Australia a bit, but we know that Fox News’s (again, News Ltd, soz but not soz) right leanings are the thing of legend now. Barack Obama has copped his fair share of very targetted hits through his 7 year long tenure. Fox’s free wheeling editorialising and Bill O’Riellying needs no introduction, and we are now at a point where we just kind of expect it.

And that’s just the political stuff. Never mind the blatant cross promotions and advertisements dressed up as stories that don’t necessarily have the consumer’s best interests at heart. Looking at you Pete Evans, Mike Willesee, Sunday Night and Channel 7.

I can’t think of a good ‘bone broth’ innuendo type joke, but the pieces are all there.

These examples, when you remove your apathy goggles and irony pants and smugness spanx and have a real proper look, are opinions masquerading as our nightly news, and we’re aware of my thoughts on those things.

It’s playing on fears beautifully, and it makes money. I’m not going to pretend that we don’t all know that, but I don’t think that we pay much attention to what it’s doing to our world. As I’ve mentioned, there are people who eat this stuff up, and there are actual proper scientific findings that explain why this dangerous material sticks, like so much black mold on our collective ceiling.

People are an easily frightened breed, with their own neuroses and suspicions and ignorance and prejudices. A handy little phenomenon known as confirmation bias ensures that they will interpret information in such a way that it aligns with their beliefs, ignore information that contradicts said beliefs, and feel better for it.

This, coupled with the fact that people generally feel compelled to conform with those around them and are super duper keen on obeying authority and generally being a good little obedient human, it’s not hard to see why this disgusting content is gobbled up by the steaming hand full.

I mean, come on, it’s ‘The News’! This a true account of ‘what’s really happening’! You can ‘trust’ the news as a source of information from ‘important people that matter’ explaining to you, the more hard working simpleton, what’s going on. 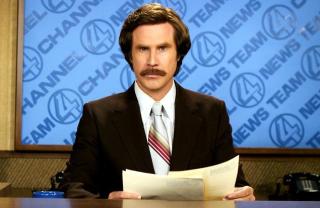 Far too many people still don’t realise that the media can and will bend and spin, often misrepresenting people and context very deliberately. It is bias. Very clearly so. And they simply do not give a shit if you know it or not, because enough of us are frightened enough to believe them.

Much like the acknowledgement of any old opinion, and perhaps as an extension of it, the willful dissemination of untruths and half truths has lead to a great societal endumbening, and is actually shattering our world into two sides – those who have the skill and inclination to think critically about the world around them and what they hear, and those that do not. To be fair, this divide has existed for forever, but damn man it will be our undoing.

Ownership of media outlets and political relationships simply do not work. Regardless of which way you lean, the media should not be your tool. It will lead to an actual real life Idiocracy, only without the sweet, sweet Luke Wilson to ease the pain.

I’m not even joking. Look at this shit. 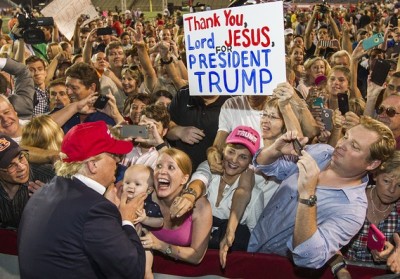 This is coming. Be afraid.

Phew! This was an extra long ranty one. I’ll cut it down next time, don’t worry. Bullet points and shit. I know your attention span ain’t so very long.

What I gone done

What you done said